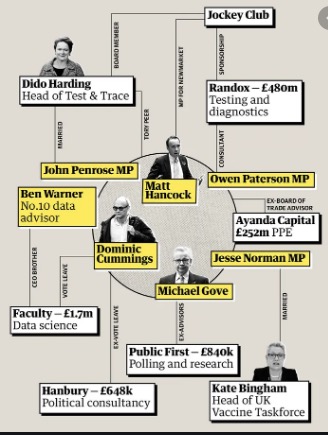 Are you out of work? Lost track of the number of job applications made with ‘no response’? Feeling the pinch financially? Well, thing is, you are not connected to the right people. You got to get in the Chumocracy Club.

No, not many people meet the criteria but if do, you are well lucky. You are gonna be rich.

The Chumocracy interview. There isn’t an interview you meet the criteria 1 and 2 and just wait for the job offer. Better qualified candidates are put through the mill just to make it look like it was all fair and above board. Honest guvnor.

The Good Law Project has exposed the government’s Chumocracy. Read on and get angry and let your MP know how shocked you are. My local elections are due and the Conservative candidate canvassed me. I told them I would not vote for a party that was corrupt and had removed our liberty and freedom in the manner of a dictatorship. He promptly left.

“We are pleased to announce that our judicial review with Runnymede of the Government’s practice of handing public sector jobs to its mates without open recruitment has been granted permission. We will have our day in Court.

The story we tell ourselves is that these things don’t happen here. That the handing out of important roles to friends, without competition, is something for abroad. But the pandemic has exposed that as a fairytale. In the real world, we are now a “chumocracy” where having the right friends matters as much or more than having the right skills.

Since the start of the pandemic, Government has created a number of new bodies whose leaders fall outside the usual public appointment regime. Many of the roles have gone to those personally connected to the Conservative Party.

The most high profile was the appointment of Dido Harding as Chair of NHS Test and Trace. A sitting Conservative Peer, wife of a Conservative MP and friend of former Prime Minister David Cameron, Harding didn’t pip other candidates to the post at the interview. There were no other candidates. The Test and Trace programme – with a budget of a staggering £37bn – has consistently failed to meet its targets and is widely and rightly perceived as a disaster.

Harding is far from the only friend of the Conservative Party to land a top public sector job. Kate Bingham, wife of Tory MP and Treasury Minister, Jesse Norman and cousin by marriage of Rachel Johnson, was appointed Chair of the Vaccine Taskforce. The vaccine programme is a success but that no more vindicates the chumocracy than Harding’s failure damns it.

The principle – that we should be appointing on the basis of talent rather than relationships – remains the same. Our public bodies perform vital functions. They must always be run by the people who are best placed to do the job. In response to our lawyers’ correspondence asking Ministers to reveal how and why certain individuals, including Harding, were chosen to lead vital public health bodies, Government has admitted the roles were not openly advertised.

It’s hard to put it better than the Commissioner for Public Appointments: “… some at the centre of government want not only to have the final say but to tilt the competition system in their favour to appoint their allies…”

This is not the Britain we should be.

We will publish the date for our High Court hearing as soon as it is available.”

Like the work of the Good Law Project? If you can, and you value democracy, please consider a donation at https://goodlawproject.org/donate/

Tweet
Posted on March 30, 2021 by Frank Bennett in Uncategorized